Jumping away from management topics for a moment...

My long-time friend, Scott Sheppard, was blogging (view it here) about why he didn't choose to buy an electric car. Economics basically. I added to that by saying it creates a huge environmentally toxic mess of batteries. They cause excessive pollution when they're created AND when they're disposed.

Living in Arizona, I've been intrigued by the concept of solar energy for the house. A long time ago, I had a solar hot water heater that was fantastic. Pretty cheap to put in, and generated oodles of 160F water almost year-round. At my previous home, I had a solar heater for the main pool. It was easily able to add a couple of months to the swim season by sucking water from the pool, sending it to the roof, and then spitting it back where it came from at near-scalding temperatures. 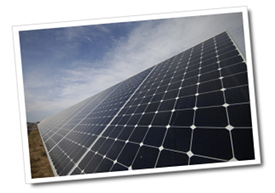 But, photovoltaics are another story. One of my good work buddies installed a big array a couple years ago and kinda regretted it. Not as much payback as he thought. So, I was intrigued when my local power company, Salt River Project (SRP), announced they were creating a community solar farm out in the desert. There's a fixed capacity -- only enough for about 3,000 customers to participate. They lease out the capacity until it's all spoken for, then they're done (and hopefully build another one). No, they don't run special dedicated wires from the farm to my house... the watts get dumped into the main grid like any other generator would. But, SRP has to build less fossil plants as they can get more of the solar ones online.

Cost? I pay a fixed price each month for whatever the farm can generate for me. Across the year, somewhere between 20-35% of my home energy will be pre-paid in that way, averaging out to somewhere in the 25% area. My annual electric bill is about $75 higher, or $6/month. Tis the price of making a statement, and was a worthy birthday present for my wife. :)

Actually, the cost of the solar is FIXED. So, when SRP just announced a 5+% rate hike, that only affects the non-solar watts I use. Eventually, I could actually save money with the farm. Check it out at SRP.
Posted by Eric at 8:14 AM