When you meet new people, many factors will affect the impression they form of you. How you handle yourself during the negotiations or discussions, your overall appearance, and whether you really did use your hands to eat that spaghetti at lunch. All of these things will contribute to the lasting impression you make. But, before things even get started, you can give a first first impression with the manner in which you introduce yourself. 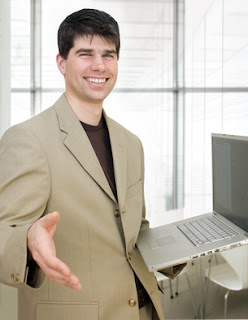 Most folks want to know that the person they’re about to work with is friendly, open, and a general team player. They want to see that, although you take your work seriously, you don’t mind taking yourself a little more lightly when needed. You can get this across in the few moments before the meeting even begins.

For example, what’s the very first thing you say as you shake hands? One of the folks you meet is going to say, “Hi, I’m John Doe,” and you’ll reply with, “And I’m Sam Smith.” And then you say, “Nice to meet you.” Which is great – except for that you don’t remember that you actually met John Doe once, at some other meeting or conference a year or two back. John recalls your meeting clearly, but to you he just wasn’t that memorable. Whoops.

Many years ago, I noticed that David Letterman always greeted his talk show guests with a friendly, “Nice to see ya.” I realized that he had devised a foolproof way to say “hi” without any implication of whether or not he had met that guest before. I adopted the trick immediately.

Secondly, don’t rush to jam your business card into the other folks’ hands. Watch for clues from the other guys on when/if cards are going to be exchanged and follow their lead. If you’re about to sit down with some folks from the far east, there will probably be a very formal exchange ceremony you’ll follow. But if it’s a few “kids” in jeans from Silicon Valley, maybe not so much. Thrusting the card into their hands would only be a sign of formality they wouldn’t need to experience.

Once the meeting begins, you have your next chance to make that early first impression. Folks will probably go around the table introducing themselves and their responsibilities. Again, if you’re meeting with high-level government officials or something, you’ll have to serve up a good degree of formality in your spiel. But, in most situations, you’ll be able to dial down on the officialism.

Instead of introducing yourself with, “…and I’m the Senior Executive Manager of the customer services team”, try something lighter like, “… and I lead the customer services team”, or even, “… and I try to keep up with and take the credit for the cool stuff that my customer services team does.” They’ll know what you mean, and in one breath you’ll get across all those points about being friendly, open, a team player, and capable of a little jocularity. They will also see that you consider yourself to be on equal footing with your team members and that you know that your job is to let them achieve their maximum effectiveness.
Posted by Eric at 9:44 AM