Some of you will recall that we switched onto a new SOLAR program provided by our electric company. If you don't remember it, you can read the posting here.

Jumping into the new program was a birthday present for my wife and, as we just celebrated another birthday for her, reminded me that we had now been on the solar program for a year. How did we do? Did the advertised stats live up to reality?

Before I jump to the comparison, I'll also throw in that we did get to have a tour of the facility a couple of months ago. Very impressive. It sits on a 144 acres and generates 20 MEGAwatts of power from 66,000 panels. The panels are on motors that keep them pointed directly towards the sun throughout the day. 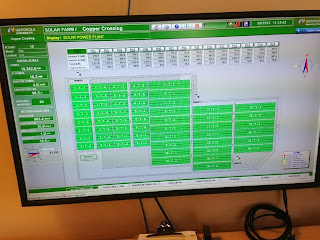 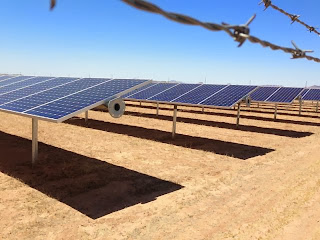 So, what were the results? We were told that over the course of one year, about 25% of our total energy usage would come from the solar system, and that the annual cost for electricity would go up about $75.

In reality, amazingly, the 25% figure was EXACTLY correct. Okay, well it was 25.16%, but who's counting? Some months were down below 20%. But a couple (April and May) were very close to 50%. That's half of everything in our house (including 2 A/C units) effectively being powered by the sun!

What about the benefits to the environment? Well, frankly, I don't really know. I don't think anyone can. It's nice to think about not having burned extra fossil fuel or been a factor in creating more nuclear fuel rod waste to be stored deep under Las Vegas. But then again, how much energy was used or environmental impact came from creating the panels, shipping them from Europe or Asia or wherever they were made, clearing the land for them, installing them, maintaining them, etc...? And what are the environmental effects when they need to be disposed of in a decade or two? At least solar panels don't kill birds like windmills do.

I think I'll just stick with the simplistic view that it's probably a better thing to take advantage of the 12 TRILLION watt-hours that the sun drops on every square mile of the earth every year. And as more folks like us are willing to invest a few bucks, the technology will continue to improve until maybe the cost/benefit equations swing in favor of renewables. Here's to hoping!
Posted by Eric at 10:26 AM