Assessing your team... make your OWN call!

As mentioned in the last post, sometimes when you walk into a new position you get to build your team. But, sometimes you have to work with the team you're given, and you need to assess them and separate the strong from the weak. Your boss and peers will tell you how they see each of your people: who’s strong, who’s weak, etc… Your boss may even tell you that someone probably needs to be let go fairly quickly.

This kind of information is good to get, but once you've heard it, you then have a very important step to take. You have to forget about it. Well, not forever, and certainly not 100%. You will use this information to help you get started in the right direction, but it should never be the sole input towards who might need “to go.”

The primary determination should always come from your own data that you collect over time. And by “over time” I don’t mean a few days. It is important to take your time with any decision that can have a major affect on someone, especially something like this. You may need a couple of months to really see this person in action and experience their ups and downs sufficiently to build up an opinion. Your boss, or others, may wonder, “what the heck is taking you so long?” My response is:


“Hey, if you wanted to get rid of this guy, why didn’t you do it before I got here? Now, I get to look the situation over. You may end up being right, but maybe there’s a way to recover the situation, and that would be a win-win for everyone.” 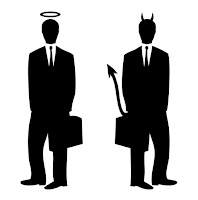 Once you’ve had sufficient time, if your personal opinion matches what you’ve heard, then you can feel confident moving forward with some sort of performance management action. But what if you don’t see what everyone else has been describing to you? They all might have described Jack as Satan himself – never following through, never being on time, never producing quality work, whatever. But you might see the complete opposite, or at least something much closer to neutral. How do you rectify this?

By earning your pay, that’s how. Start looking into all of the variables. Was something wrong in Jack’s personal life? Maybe there was, sometime ago, and he’s gone back to being an at-least-average employee, but he rubbed a bunch of folks the wrong way back then, and they are having a difficult time forgetting it. Similarly, he could have had one bad work event happen, eons ago, but that impression is living on. Maybe he had a personal problem with his previous boss, and now he’s thrilled that you are there, and is out to show you what he’s capable of.

I’ve actually seen each of these circumstances be true, along with many others. It takes some digging, and you may not be able to ultimately pin the “new Jack” on any single, obvious, factor. Does it really matter? If you’ve got a guy who seems to be a keeper, someone you think will help you achieve your own goals, it’s up to you to stick up for him, and let his detractors know that you don’t agree with them.

The point is, you are the new guy in town, you have to assess your team, and you are the one with the fresh pair of eyes – unaffected by anything that might have occurred in the past. It’s your call. Don’t be afraid to make it.

And here’s another side benefit to handling this kind of situation with a “fresh eyes” attitude, especially if Jack’s problem was something personal with his previous leader. When you have that first, long, sit down with Jack, he's going to assume that everyone has given you the full 4-1-1 on him. He’s going to be expecting that your relationship with him is going to pick right up from where the previous boss left it. You have the opportunity to get this working relationship off on the right foot:


“Jack, in talking with my boss and human resources, I’ve heard that, over the last year or so, you were having a few performance problems. While I don’t want to discount those completely out of hand, I would like you and I to start fresh. Let’s do a quick review of some of the issues I’ve heard about. You can tell me your perspective and we’ll make sure you understand how to improve on those items, if you already haven’t. Then we’ll put them out of our minds and look at the future.”

Jack really isn’t going to see that one coming. With any luck, he’ll see this as an opportunity for that fresh start he was wishing he had, and some of the time, he’s going to take advantage of it. Someone who’s already built up a negative record and is already “out of the race” isn’t going to try very hard to pull out the win. But, given an opening to start over, it may be the opportunity he was hoping for.

Sure, not all the time. Some Jacks might try a bit, then fall right back into their old ways. Or they might not try at all. Those are the ones where you’ll quickly see their performance matching the negative expectations thrown at you by your colleagues. But, on occasion, you will see something positive out of this, both in gaining a performing employee, and in gaining his respect.
Posted by Eric at 6:19 PM