Many books delve deeply into public speaking. For sure, this is an art that is improved and perfected only with great practice. The basic concepts of, say, getting over your nervousness by visualizing the audience in only their underwear, can be gleaned from other sources at your leisure. 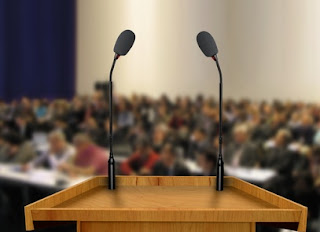 What we want to discuss here is not so much about presenting to an auditorium full of folks, but more about speaking in front of your team. There are many methods for delivering messages, but by choosing to do so as you stand in front of your employees, you have the opportunity to also develop a rapport with them as they see you in action. If done properly, many of the team members will come away actually feeling like you connected with them, personally, almost as if you had just finished a one-on-one sit down with them. But by doing it in a group mode, you’ve accomplished this over dozens or even hundreds of folks, all at once. There’s a great return on investment!

Let me start with the single, most important rule you can follow – be as honest as possible. I know that sounds easy, but it is actually much more difficult than it appears. Whether the issue is something about upcoming raises, the status of an ailing product out in the field, the slow progress of an ongoing development, or the potential for some sort of future major negativity (downsizing, salary reductions, wiped out bonuses, etc…), it becomes quite tempting to hedge the truth on occasion. Sometimes this is, unfortunately, necessary. But it should be contained to only a very small class of topics. I'll cover some of this in future posts.

For most items, your discussion is merely around how some known issue is progressing. If that issue is veering off course, even to the point of embarrassment, maybe it would be okay to skip lightly over some of the negative items and focus on the positive ones? I assure you that this is an awful idea. Your people can smell dishonesty as easily as a dog smells fear. Between them, everyone in the room knows pretty much everything that’s going on anyway, and if you start omitting points to make things seem better than they really are, the team will eventually realize it, and you will have lost credibility.

That doesn’t mean that you need to be nasty and pinpoint blame on deserving individuals. But you can certainly say things like, “We’ve had a few unexpected detours on the XYZ project, and it is now looking to be about 2-3 weeks later than we scheduled.” Some people in your audience know that it’s true, so you might as well discuss it.

The important point here, and your "opportunity is knocking" chance of the day, is to show that you are a real leader. Balance the negative points with how you intend to get things positive again. Things go wrong – that’s life. But, “We’re putting 2 more people on this,” or “We’re going to remove the extra reporting feature,” will show active leadership that is intended to set the boat on course again. And everyone will feel like an insider into both the problem and the intended solution.
Posted by Eric at 12:31 PM