Okay, so we want to be as honest as possible in delivering our information. But sometimes we just don't have all the facts. That doesn't mean we get to avoid the conversation -- we just need to make reasonable guesses. You should expose the various thought processes that are being used and talk about the various possible outcomes. Here’s an example from the real world:


“Folks, this is Captain Joe up in the cockpit. We can’t push back yet because something’s wrong with one of the engines, and we’re bringing the mechanics out to take a look at it. Hopefully, they’ll figure it out quickly and we hope this won’t take more than a few minutes.”

Come on, man! Joe has no freakin' idea how long it will take them and is just making stuff up.


Patient: Will you be able to cure my wife?
Doctor: We sure hope so.

Duh! What the heck else would you be hoping for? 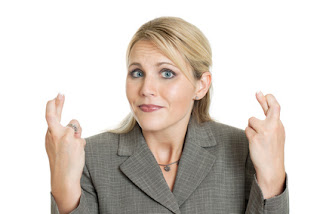 These people are communicating useless information. What's the key give away? Hope. If you catch yourself about to use the word "hope", change it. Of course you are hoping, but what do you really know that is factual?

If you’re going to convey iffy information, change to words like “possibly,” “probably,” “unlikely,” or “almost certainly.” These are good for transmitting a true thought process on your part and will give everyone a reasonable expectation of what’s to come.

Also, when you’re not sure how something is going to go, it's not a good idea to slant your thoughts  to give folks the impression that the best possible outcomes will occur. Sometimes it feels easier to not “stir the fire” or keep people somewhat nervous regarding what might transpire. Wrong.

I’m not saying that you need to always represent the worst possible outcome, but you need to be realistic. Something less than the best outcome might happen, and if you have led folks to believe that the best outcome was very likely, they’re going to be less pleased than if you had given them that expectation in advance. If you’ve prepped folks for a relatively bad outcome, and something better happens, they’ll be pleasantly surprised. I know that might be like putting whipped cream on a scoop of mud (or something), but it can have a positive effect.

Case in point: if Captain Joe feels that the delay will be in the 30-60 minute range, telling you that it’s just going to be a few minutes might not bother you now, but will eventually lead to your spewing obscenities. On the other hand, if he comes out and says that the delay could be as much as an hour or two, and it turns out to only be 45 minutes, you’re going to be thrilled.

Taking the easy way out early will be more harmful than being realistic.
Posted by Eric at 8:44 AM